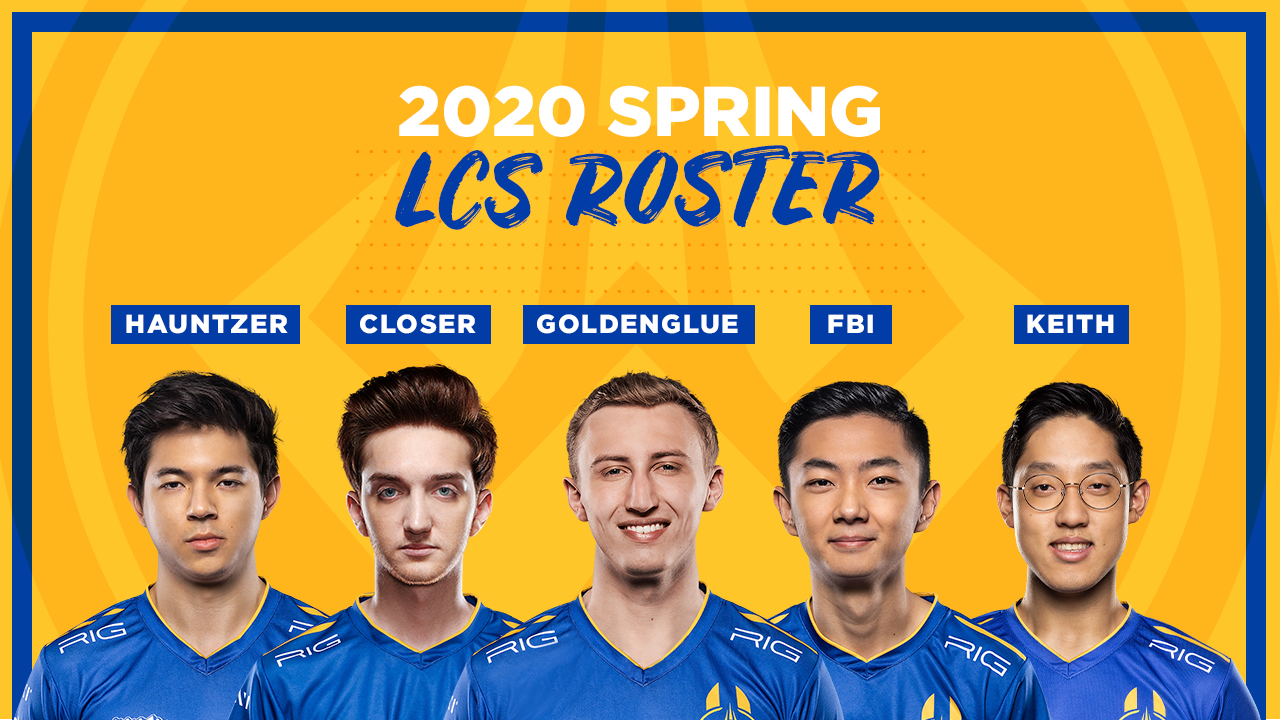 SAN FRANCISCO, Calif. – The Golden Guardians (GGS), an esports affiliate team of the Golden State Warriors, have finalized their five-player LCS roster and coaching staff for the 2020 Spring Split of the League of Legends Championship Series (LCS), which is listed below:

Yarnell enters his second season with the Golden Guardians, helping to lead the team to their first-ever playoff appearance during the 2019 Spring Split. Prior to joining GGS, Yarnell spent three years with Team SoloMid (TSM), helping lead TSM to the World Championships in back-to-back seasons (2016 and 2017). A three-time NA LCS Champion, Yarnell has been named to the NA LCS All-Pro 1st Team twice (Spring 2017 and Summer 2016) and has twice earned NA LCS All-Pro 2nd Team honors (Spring 2018 and Summer 2017).

Çelik joins the Golden Guardians after spending the last three years with Royal Youth (previously named Royal Bandits), a professional League of Legends team based in his home country of Turkey. Last season, Çelik was named MVP of the Turkish Championship League and led the team to an appearance at the 2019 World Championships after winning the TCL 2019 Summer Split playoffs.

Gilmer joins the Golden Guardians after two seasons with Cloud9 and Cloud9 Academy, where he consistently led the team to a top-two seed and earned playoff slots in each split and ultimately won the NA Academy 2018 Summer Playoffs. Prior to his tenure with Cloud9, Gilmer spent a year and a half with Team Liquid and Team Liquid Academy.

Huang enters his first full season with the Golden Guardians after joining the team prior to the 2019 Summer Split, competing with both the LCS and Academy rosters. A native of Melbourne, Huang spent the 2019 Spring Split with the Bombers of the Oceanic Pro League (OPL) and competed in the 2019 Mid-Season Invitational in Vietnam.

Jew, who spent the 2019 Summer Split playing AD carry with the Golden Guardians Academy squad, will transition to support with the LCS roster beginning this spring. Prior to his tenure with GGSA, the San Leandro native spent the previous two seasons with Cloud9’s LCS and Academy teams.

Nick “Inero” Smith will return to the role of LCS head coach for the Golden Guardians after serving as LCS assistant coach during the 2019 Summer Split, where he focused his attention to the club’s Academy team. Under Smith’s leadership, GGSA reached their first-ever playoff appearance and placed second in the NA Academy 2019 Summer Playoffs. Smith previously served as the Golden Guardians’ LCS head coach to begin the 2019 Spring Split after a stint as team consultant at the end of the 2018 Summer Split.

The Golden Guardians are the LCS affiliate team of the Golden State Warriors. League of Legends is a multiplayer online battle arena game where two teams of five players battle on Summoner’s Rift with the goal of destroying the heart of the opposing team’s base, known as the Nexus, to achieve victory. Currently celebrating its 10th year, League of Legends is the most watched esport in the world with 13 international leagues worldwide and over eight million peak concurrent players daily.

For more information on the LCS and Golden Guardians, visit lolesports.com.